A slightly different version of this article was published here in CounterPunch. A special thanks to JPS for his insightful comments and suggestions.

In scenes reminiscent of Mussolini’s black shirts, a dozen or so militants dressed in black, some wearing ski masks, brutally beat peaceful protesters who were participating in a general assembly while occupying the School of Law and Political Science in Montpellier, France. Armed with Tasers, cudgels with nails, and reinforced punching gloves, the assailants unleashed a bloody assault on the night of March 22, sending three students to the hospital and injuring many more. The security guards at the university stood idly by and watched the beatings, while the police and riot forces remained outside the university and did not enter to prevent the assailants’ attack.

The militants were described by bloodied eyewitnesses as fascists and right-wing extremists. Octave, a student affiliated with Solidaires, affirmed along with others that the Dean of the University, Philippe Pétel, was seen opening a locked door to the amphitheater to let in the private militia, and he did not authorize the police to enter the university according to another eyewitness, Léna. As the protesters were fleeing, the metal security gates were closed, trapping some of them inside of the building, where they continued to be beaten.

Pétel and his black shirts were seen with professors, teaching assistants and other adults celebrating after the attack. He then proceeded to organize the safe escort of the militants out of the university according to other eyewitnesses. In interviews, he said that he was “proud” of the assailants, and he asserted that they were from the university and included students as well as perhaps faculty. This was confirmed by eyewitnesses, who identified a civil law professor and a history of law professor among the black shirts.

The peaceful protesters have been mobilized against new rules restricting access to the university, and 1,000-2,000 students had joined tens of thousands of others on March 22 in the unified mobilization across France against President Macron’s attack on public sector workers. That evening, a group organized an authorized general assembly in an amphitheater of the School of Law and Political Science, transforming it into an occupation. According to one of the participants, the gathering was organized around opposition to the Vidal Law, the baccalauréat reform, the attack on the public sector and more generally “the sick privatization of French institutions implemented by the Macron government.” The protestors agreed that they would peacefully exit the building with their hands in the air if the riot police invaded the general assembly.

The brutal and precipitate assault unleashed by the university administration on this non-violent gathering clearly demonstrates the very real and ongoing threat of fascism on university campuses (and beyond), as well as the complicity of so-called security forces. It is a stark reminder of the urgency and importance of antifascist organizing and mass mobilization against administrators like the dean now known as Maréchal Pétel, his black shirts and anyone else of their ilk.

This event also raises some broader questions about the shared interests across the different strata of the university’s hierarchical power structure, including administrators, professors, teaching assistants, students and (security) staff. Although some of these groups sometimes either work at cross-purposes or present themselves as such, this alignment in violence of reactionary members of all of these strata casts a stark light on the role of the university as a whole in training the managers and administrators of society. Members of all of these groups are invested in one way or another in the hierarchical administration of neoliberal capital, and this poses a unique challenge to those who oppose it.

Moreover, far from being an extraordinary event, the violence unleashed by this cross-strata power alliance simply gives students more of the same, in the sense that it trains them for a society that is built on the violent repression of radical dissent. It is, we might say, eminently practical, hands on, active learning—all of the buzzwords of higher education today! The sheer brutality of this violence nonetheless has the power to rupture the illusion so often embraced by all of these groups of being neutral observers of society for the sake of an objective education.

A petition has been circulating that calls for Pétel to step down, and an inquiry into the affair has been opened by the state. On March 24, Pétel tendered his resignation. There could be no better time, however, to be wary of the political theater of the state apparatus and its standard script of isolating incidences and individuals in order to mask the systemic repression of neoliberal education behind exceptional, individual instances (all the while endeavoring to demobilize students and activists in the repetitive, patronizing mantra: ‘we’ve got this one—there’s nothing for you to see or do here’). 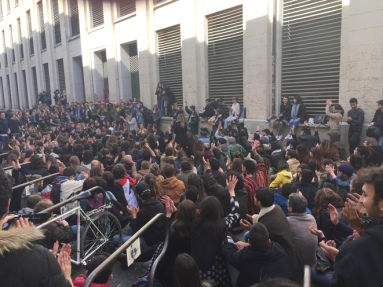 The coordinated university-militia-security attack on students in Montpellier, which is rooted in a long history of right-wing extremism at the School of Law and Political Science, is part of a larger series of ongoing police confrontations and interventions at universities across France, from Lille, Dijon and Nantes to Mirail, Paris and elsewhere. A massive solidarity assembly occurred on March 23 in Montpellier, and occupations have occurred at universities in Lille, Bordeaux and perhaps elsewhere. Activists have called for a mass mobilization on March 28, and there have been calls for unlimited occupations.

If we take the fascist assaults in Montpellier as exemplary of the activities of the strong arm of the military-academic complex when it is under threat by those who seek to take back even a modicum of control of the university, we are left with a series of crucial questions. What, we must ask, is the type of law and the ‘science’ of politics being taught in Montpellier, and other universities like it? Who are these black shirt academics who play ‘good cop’ by day by pretending to play by the rules, only to become ‘bad cop’ by night and beat into submission any students who do not passively acquiesce to neoliberal state imperatives (and what does this teach us)? Could there be a more pressing need to take over a university and seize its institutional power, which is obviously in the hands of fascists? Is it possible to imagine a more opportune moment for an insurgent university that rises up and pulls off the masks of those masquerading as good cops? Isn’t the time ripe for educating the educators, from the bottom up, by transforming universities across France into occupied sites of collective education in which power is taken away from academic black shirts and seized by those invested in developing an entirely different understanding of politics and its pedagogy?